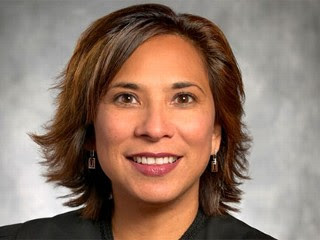 A San Diego judge accused her fellow judges today of mishandling criminal cases and said the murders of Chelsea King and Amber DuBois might have been prevented if their killer had been kept in prison for a prior sex offense.

Superior Court Judge DeAnn M. Salcido, during a news conference today, put particular blame on supervising judge Peter Deddeh who approved the sentence of convicted sex offender John Gardner, who has since pleaded guilty to raping and killing the two young women. She provided ABC News with a copy of her prepared comments.

Deddeh "put two young girls on a deadly collision course with a convicted child molester," Salcido said of the tragedies she believes might have been prevented by a tougher sentence.

In 2001, Deddeh signed off on a plea deal that gave Gardner a six year prison sentence for molesting and beating a 13-year-old neighbor he lured to his house. He was released after five years despite a probation report that called Gardner a predator and risk to society.

While on parole, he committed several crimes, including marijuana possession, and violated his parole by opening a MySpace account and living too close to a school. Those offenses could have sent him back to prison.

Shortly after his release, Gardner raped and killed King, 17, and DuBois, 14. He has confessed to both murders and is scheduled to be sentenced next month.

Salcido announced today that she is taking the unprecedented step of asking a California appellate court to force San Diego judges to "follow the law" and stop harassing her for trying to do so.

She accused Deddeh and other colleagues of rubber-stamping too lenient plea deals and failing to impose mandatory probation conditions such as protective orders, firearm prohibitions, and anger management counseling that are designed to protect public safety.

"This pattern of behavior by Judge Deddeh and others shows a reckless disregard for human life," Salcido said.

"I can no longer remain silent," the judge said in a press conference.

Salcido said that from her first days on the bench, she was told by seasoned judges to "go along to get along" and quickly dispose of sex abuse and domestic violence cases by accepting hurried plea deals and ignoring mandatory probation conditions for violent offenders.

When she complained to Deddeh, he told her to just "dispense of 'Chevy justice' and let the other courtrooms dispense of 'Cadillac justice,'" she alleged in court filings. Deddeh explained that they need to get through numerous trials with limited resources and save money and time for "more important" cases, Salcido said.

But Salcido said that even with misdemeanor domestic violence cases, "everyone is entitled to the same justice or it is not justice. The administration cannot tolerate such distinctions."

In an email Salcido included in her legal papers, Deddeh allegedly wrote: "As we discussed the other day, our goal in D-3 is to expeditiously move defendants through the calendar and resolve their cases with the fewest # of court hearings possible&.we need to do what we can to limit the # of times our staff has to touch a file." Salcido told ABC News that although her actions today might cost her her job, "public safety is the issue, not my career."

"I hope to increase judicial awareness and prevent judges from recklessly disregarding the laws as they have been," Salcido told ABC News.

Fair Use:This site contains copyrighted material the use of which has not always been specifically authorized by the copyright owner. We are making such material available for educational purposes to advance our understanding of social justice and human rights issues including gender-based violence. We believe this constitutes a ‘fair use’ of any such copyrighted material as provided for in section 107 of the US Copyright Law. In accordance with Title 17 U.S.C…. Section 107, the material on this site is distributed without profit to those who have expressed a prior interest in receiving the included information for research and educational purposes. If you wish to use copyrighted material from this site for purposes of your own that go beyond ‘fair use’, you must obtain permission from the copyright holder.

Innerlite
Michigan, United States
I make multi-media lamp shades.After many years working in the criminal justice system as a victim services coordinator I am happily retiring to leave the daily tragedies of that world behind and allow myself to focus on my need to be with nature and to create beautiful things...playing with the natural duality of light and shadow.